When you hear about the name James Harden, you immediately think about the Houston Rockets forward, his three-pointers, his euro-step and last but not the least, his beard. But, there was once a James Harden without a beard, which is just as hard to imagine for us as it is for him.

The NBA eight-time All-Star and six-time All-NBA First Team selection no doubt has one of the most iconic beards in NBA history. He’s always had potential, and shows up with some flashy moves, but ever-since growing his beard, it has brought in confidence that was noticeably missing from his play before.

But before looking into James Harden’s journey from clean shaven to superstar beard man, we need to look at who he was at the beginning of his career and that means, we need to take a look at James Harden without a beard.

Harden just might have gotten lazy enough to stop shaving, which led to his overgrown beard becoming famous worldwide in the year 2009. But as we’ll see later, he certainly wasn’t getting lazy on the court.

Today his beard style is seen in numerous songs and T-shirts and worn by so many around the world. If you’re interested, you can also check out our list of best James Harden beard styles after he started to grow facial hair. 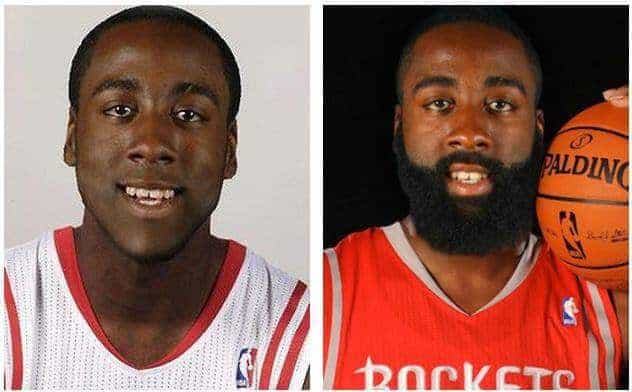 James Harden Photos Without Any Beard

There were days when James Harden had no beard at all. He usually wore a youthful look ranging from a clean shave to light stubble and mustache. Here are 7 photos of James Harden without a long or full beard. Cleaned shaved beard is free from any facial hair on the face, aside from the eyebrows, eyelashes, and shortly trimmed sideburns, of course. A clean shaved look requires you to shave your beard on a daily or a couple days basis depending on your growth. It makes sense that Harden had time to clean shave given that he still wasn’t a NBA superstar by then.

Before James Harden started his career in the NBA, he attended Artesia High School in Lakewood, California and later led the school’s basketball program to state championships in his junior and senior years. He then earned an invitation to play in the 2007 McDonald’s All-American Game were he met J.J. Hickson, Kevin Love and Michael Beasley, among other then-future NBA stars.

Look closely in this tweet and you’ll see a beardless Harden in his No. 13 jersey: 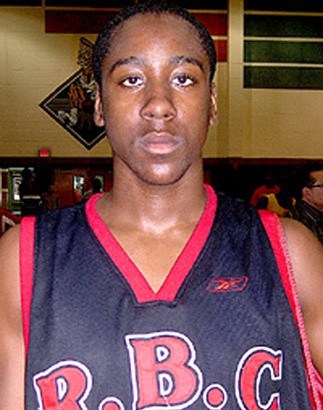 As with any endeavour, James Harden started small with a light mustache and a goatee. Look closely and you’ll see an incredibly light mustache and a slightly trimmed goatee on the chin. The sideburns are kept short and trimmed and the neck and jaw line are clean shaved.

This style is just as time consuming as a clean shaved look as not only do you have to keep your neck and jaw line clean regularly, trimming the goatee, mustache, and sideburns to make sure it doesn’t grow too much is a hassle for any beardsman out there. 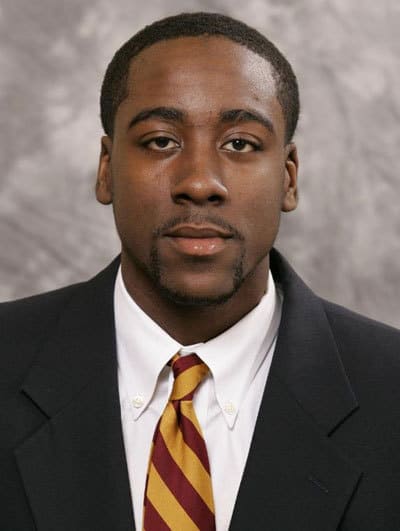 This beard style incorporates a thin pencil mustache which extends down squarely from both sides to connect to a small trimmed chin goatee. The sideburns are short with a clear neck and jawline. This is one of the neatest looks of James Harden before growing a full beard.

Later on, around this time, he did bring his pencil moustache and goatee on to a slightly heavier style, connecting it to his really thin sideburns using a thin line of beard on the jawline as we can see on this Sports Illustrated cover.

.@adidas has released the @JHarden13 x @SunDevilHoops throwback jersey worn by Harden on the cover of Sports Illustrated in '08. 🔥https://t.co/CtxCSvvcL4 pic.twitter.com/O1GtuBaNjV

With a cleanly shaved mustache, the facial hair on the chin looks prominent. This James Harden without a beard look was the early stage of the trademark beard Harden proudly wears today. 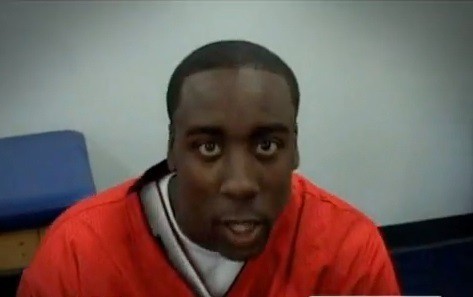 A trimmed beard is one of the easiest beard styles to choose from, and a perfect one for lazy people who still want to keep some facial hair but don’t want to end up looking like a mess. All you need to do is use a trimmer set to your preferred length and trim any beard on your face every few days. Unless you’re keeping a stubble you don’t have to worry about your neck or cheek line either.

As we’ll see in the next one, Harden finally started keeping a proper beard when he showed up with a stubble. 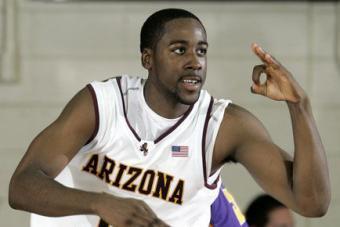 In this picture, Harden can be seen wearing a stubble, otherwise knows as the “10 day beard”, which is around 4 mm to 5 mm in length. Stubble beards are allowed to grow for a few days without any intervention. A clearly defined neck and cheek line is one of the key aspects of a stubble. The areas below the neck line and above the cheek line should definitely kept clean shaved every other day to maintain this look. 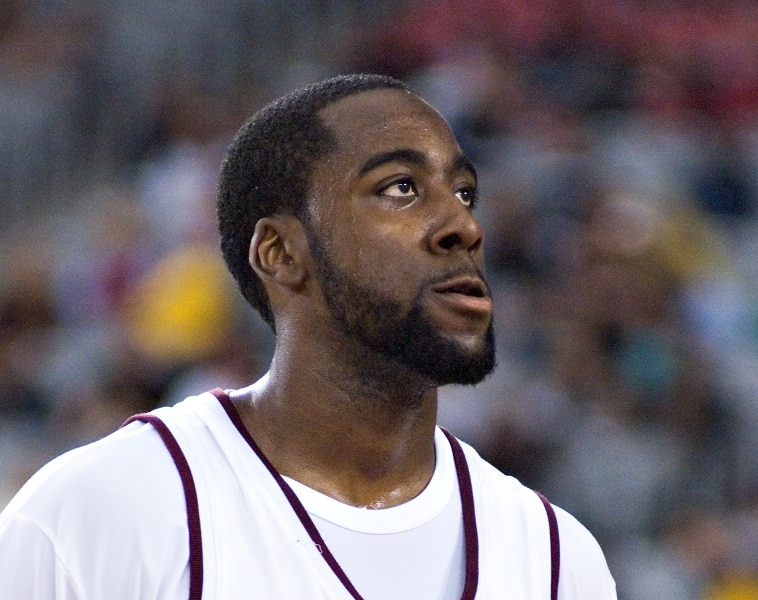 Somewhere around season four of Harden’s career with Arizona state, where he had his breakout season and was scoring on average 27.4 points a game, he went from good to straight-up amazing. This unexpected leap can only be attributed to him finally growing out his beard.

How to Get Conor McGregor Beard 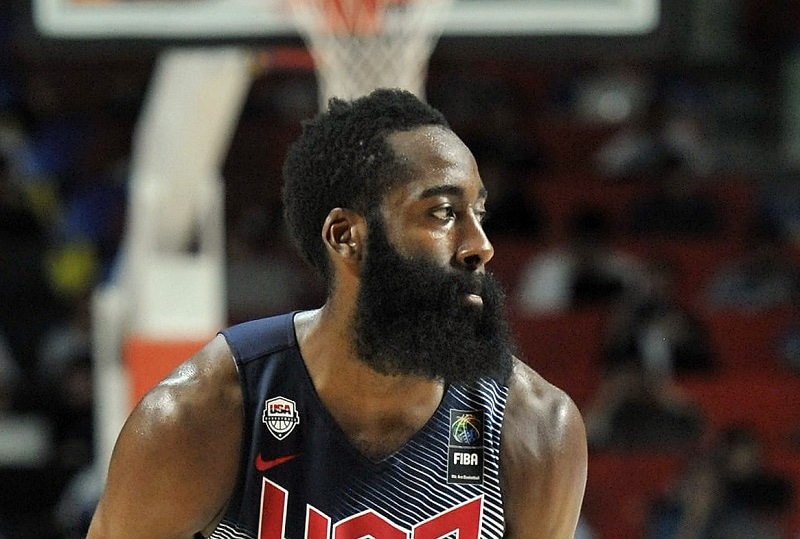 It feels a bit too coincidental that his career took off exactly around the time he started growing a beard. A probable likelihood is that his body underwent physiological and hormonal changes that made it possible for his magnificent beard to propel him to NBA superstardom.

With his beard finally in its fully evolved form, James Harden became not only a sports icon but also a style icon whose beard styles ended up being copied all around the world.

The Houston Rockets and Harden’s success of making it to the NBA finals and winning Olympic gold medal can thus be rightly linked to the growth of his beard from clean shave to full lumberjack beard. 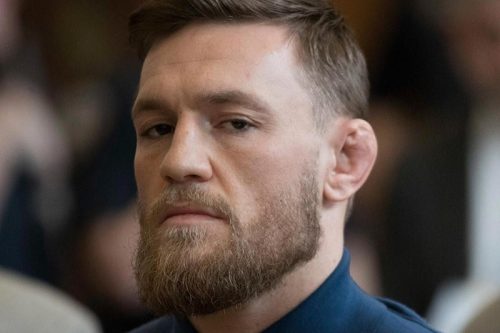 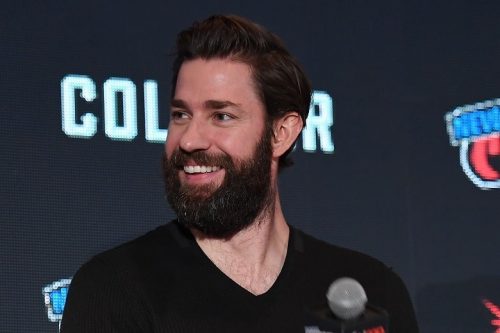 3 thoughts on “James Harden Without A Beard: 7 Looks to Laugh Out Loud”