When you are considering growing facial hair, a handlebar mustache is probably on the back of your list as the most complicated option. However, you shouldn’t be afraid of making it. In fact, such mustache is pretty easy to create. All it needs is some daily styling. Keeping a handlebar neat and stylish will just take a few minutes of your time. But the result will truly be impressive.

Knowing how to style such a mustache is a great skill that’ll help you deal with your facial hair in the future. If you need some inspiration, take a look at some of the most popular handlebar options to make you understand how great your choice really is.

Although early variations of the handlebar and similar-looking mustaches showed up on depictions of and monuments to the Celts from the Iron Age, the handlebar mustache as we know it today became popularized during the latter half of the 19th century in the United States. It wasn’t dandies or rich, stylish men who made it famous, but notorious Wild West figures such as Wyatt Earp.

At the same time, European soldiers were sporting the distinctive mo, a trend that lasted all the way up until World War I. The style showed up during the Gay 1890s and the Roaring 1920s, saw a brief surge in the 1970s, and today’s on-point hipster culture is currently giving it a revival. 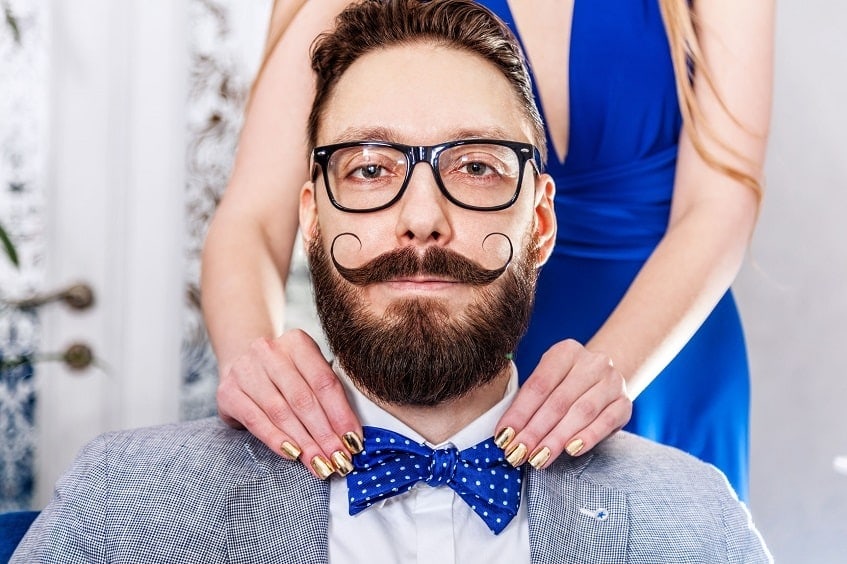 The handlebar resembles the handlebars of a bicycle, no doubt. In addition to a general neatness and a well-groomed shape, the mustache is characterized by ends that are twisted into a thin line and curled in a fine swirl.

How to Grow A Handlebar Mustache the Right Way?

Growing and training are the two most important aspects of nurturing a handlebar mustache. To begin with, let it keep growing. At first, you don’t even want to trim it too much. The style depends on length, at least at the ends.

After a while, as the hairs start to overlap your upper lip, then you’re ready to start thinking about trimming—but don’t do it yet. Before that, keep the scissors and the razor away from your top lip, and start using mustache wax to create more flexibility.

How to Trim & Shape

Trimming a handlebar is tricky, mainly because you shouldn’t—I kind of lied earlier; sorry ’bout it. The trick to this mustache is combing it. Your philtrum is a natural divide and you comb your mustache hair to either side of it. Combed straight down, the hair may brush or even cover your upper lip, but you still shouldn’t cut it. You need it.

Yeah, okay, your mustache is not a beard, but don’t be a pedant, dude. Facial hair is coarse and wiry. A premium beard oil, regularly applied, will keep your mo-hair (haha, see what I did there?) softer and more manageable.

Comb it often, comb it lovingly, and comb each side toward its respective cheek. Begin this regimen as soon as your ‘stache is long enough to comb.

Lastly, always style your ‘stache with wax made for facial hair. That’s how you get the signature curls at the ends.

How to Curl a Handlebar Mustache?

Curling your handlebar is easy. You don’t need any styling tools beyond a comb and some mustache wax. First, comb your mustache on each side. The ends should point toward either cheek. Using just your fingertips at first, tweeze your ‘stache between your fingers and, when you reach the end, give them a twist. Next, lightly coat your fingers with mustache wax and repeat, this time using the wax to curl the ends.

Which Handlebar Mustache Style Should You Pick?

That’s a difficult question to answer. It depends on the growth pattern of your mustache, the thickness of your hair, and your own personal style.

How to Trim a Handlebar Mustache?

Don’t listen to anyone who advises not to trim the handlebar mustache. You should trim the mustache to make it look like a planned and desired one. But make sure that you are not trimming the edges where the mustache will curl up to resemble a handlebar. Trim the other parts of the mustache. Trim it when it’s clean and doesn’t have any sort of wax or mustache products applied to it. Comb the mustache to one way and trim anything that looks like straggling hair.

Another important thing is making sure that the mustache is not getting into the mouth. This is very annoying. Trim the mustache that grows down the lip line because you don’t need that for a handlebar mustache. Some people want to trim the mustache frequently, that’s the wrong idea. Trim it once a week for a better result.

Mustache wax has no alternative when it comes to styling a handlebar mustache. No other product can guide the mustache to the targeted way except mustache wax. You can get an in-depth analysis of it in our article the best mustache wax.

The best mustache wax we recommend to take good care of your mustache is the ‘Firehouse Moustache Wax‘. If you are confused, read the reviews and you’ll understand it’s the best right now.

Can everyone grow a handlebar mustache?

Which artist is famous for handlebar mustache?

According to a survey reported by The Daily Telegraph, the famous Surrealist artist Salvador Dali is the most popular for his unique handlebar mustache.

Where did the handlebar mustache originate?

Handlebar mustache first came into the limelight in the later part of the 19th century. Though no specific year is recorded, the possible originating year might be 1972.

How to curl handlebar mustache?

Using mustache wax is the most efficient way while curling up the handlebar mustache. One can curl it by applying wax to the edges and guiding it upward to make it look like a handlebar.

A handlebar mustache is something many men dream about. Remember, that in order to sport the most stylish handlebar, you need to grow a pretty long mustache. Allow your hair to grow for a while even if it looks a little unkempt. You will have to sacrifice your neat appearance for about 6 weeks in order to get a perfect result. Brush your mustache while you are growing it. It will help your hair “get used” to a special shape. Use special mustache wax to twist and shape your new handlebar.

1. Handlebar mustache with a stubble 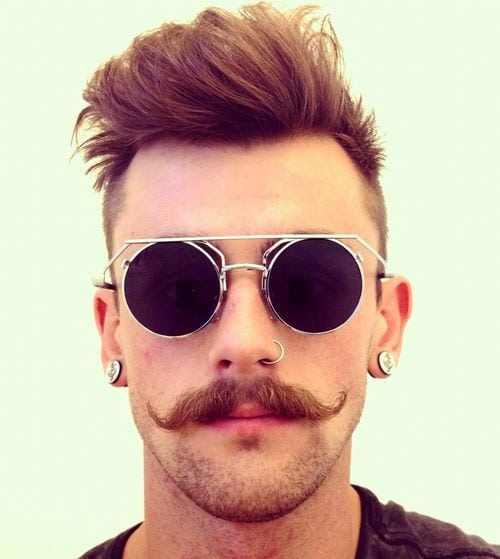 A good way to outline your handlebar mustache will be to contrast it with stubble and an undercut. The less hair you will have around it, the more interesting and impressive the mustache will look. You can even consider shaving your beard altogether.

How to Grow a Handlebar Mustache 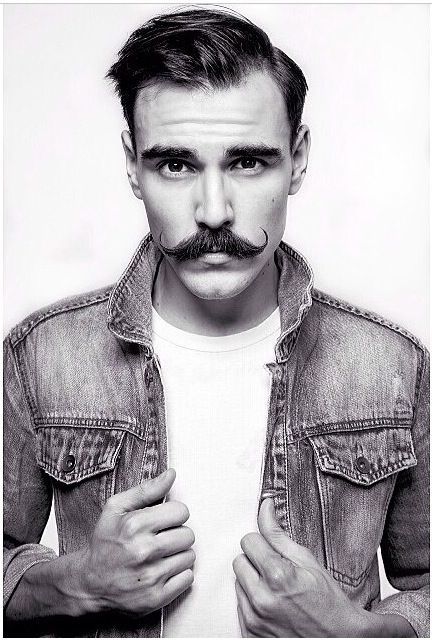 Ends of a handlebar mustache leave a lot of room to your imagination. The longer they are, the more experiments you can make. One of the options is to use some wax to shape the ends upwards and make them as high as you possibly can. 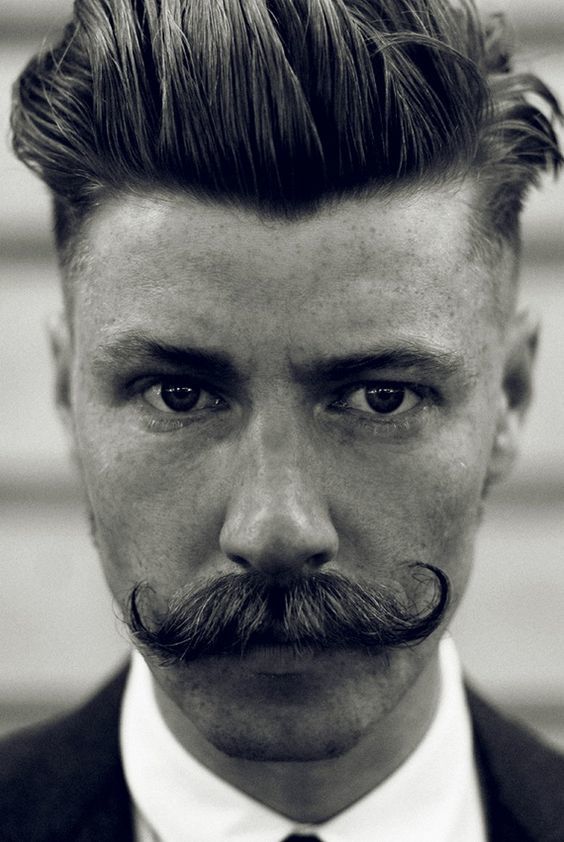 Did you think that looking modern is impossible with a handlebar? You were wrong. Consider creating an asymmetrical mustache by making one of the sides lower than the other. Just make sure the hair is very neat. Otherwise, the asymmetry will be considered messy.

A very special way to create a mustache would be to separate it in the middle. This is not an easy job since it requires a lot of precision. Make sure not to overdo the spacing, otherwise, you will end up shaving the whole mustache off.

5. Handlebar with a chin curtain 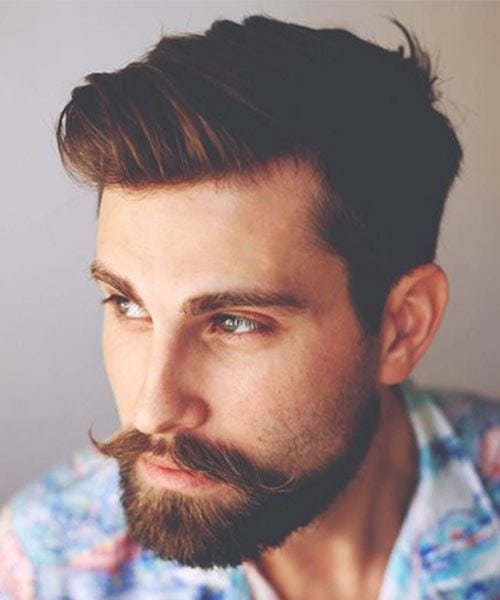